Child support is a contentious issue, particularly when it is part of an already-heated divorce settlement. There are many instances in which one parent or the other may believe that opting out of support is best for both individuals, whether it is out of financial concern or an attempt to limit visitation and custody. Although the couple could come to an agreement that waives child support, when the agreement is presented to the judge, not only can the judge override it, but it may also reflect poorly on both individuals. 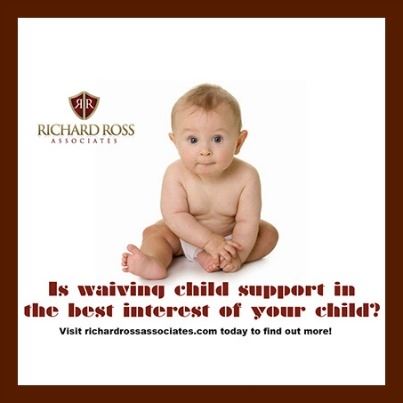 Under the laws associated with child support, it is a payment that is considered to be important for ensuring that the child is provided for. As such, parents who are trying to waive that support may be considered to be acting in a manner that does not reflect the child's best interests. The courts view these types of actions negatively, as it is the primary goal of the court system to make decisions based on the best interest of the child involved. If you are looking for a divorce lawyer who has an extensive background in family law, call Richard Ross Associates.